The Streets of Insanity

Happy Sunday. Yup, it is Sunday already. I know a lot of you have been waiting for the next installment of my adventures in Pakistan. Well, I cannot find any of the pieces I wrote, so I am going to wing it from memory.

Keep in mind that I got sick on day three, so a lot of it is a blur. But here goes.

My first week was actually pretty exciting. Since my luggage was lost we went out looking for clothes for me to wear until I got my own. Much to my annoyance, after visiting two different bazaars and about ten shops, we discovered that they don’t sell clothes for people my size. Now, let me tell you what. I used to be a size 24/26 close to 300 pounds. I am now wearing 16/18 and am only weighing in the 230’s (depends on which day of the week.) So to not be able to find any clothes large enough was really quite honestly pissing me off.

Add to this that I don’t understand a single word anyone is saying to me. My husband has even slipped back into his native tongue and I am feeling sorely left out. Now, as to my clothes. Okay, I’ve been in them for about 40 hours at this point and I probably smell bad, but I don’t think it is bad enough to cause everyone to stare at me. And everyone is staring at me. I later discovered it was because my clothes were too tight. Seems as though the Pakistanis don’t appreciate the snug fits of Americans or Europeans. 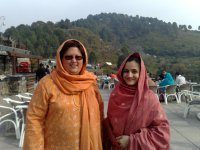 So after a few tears (mine of course) we make our way to a fabric store where I will choose the cloth for my new outfit. The fabrics are absolutely beautiful. Most of what we look at is embroidered. It is the big thing, and for good reason. After some haggling with my newly-met mother-in-law- and sister-in-law, they decide on a good color for me. I have grown to love them very much, but they are very influential when they choose to be.

I stopped in a few stores looking for books. I figured I would do lots of reading over there on my laptop, but electricity is something else there. Because of the lack of energy in Pakistan they are on a load sharing program. Every couple of hours the lights go out in different areas for an hour at a time. It is very weird to all of a sudden be sitting in the dark with no power. But alas, this has been going on for so long that the locals are used to it. Many have set up their own generators to compensate in those times. However, it does make it difficult to work on a laptop and to stay charged.

In the bookstores I stopped in, I could not find any fiction written in English. They have tons of textbooks and children’s readers, but none of the fun stuff. I was reading THE GILDED SEAL by James Twining and was nearing the end. I was getting very worried. What about my IPod and all the eReader programs I have loaded onto it? Seems as though when I switched computers and synched on the new one, I did not move the eBooks and so there were NONE loaded. I wanted to fall under a truck. Oh well.

Now, going back to the trips into the bazaars to shop, I have to mention the traffic in great details. There are NO traffic laws. Oh, they have been written and a few of them actually posted, but they are like Atlantis, gone, gone, gone. We get into the car and we head out. We are not even out of the driveway before a car coming down the side street is honking at us because we are not driving fast enough. Our next turn is onto another side road where there are around 30 bikes, maybe a dozen motorcycles, and a line of cars, actually two rows of cars, going the same way on a two-way street, unfortunately we have to go in the opposite direction of them. So the husband (who I never knew possessed the skills of aversion that he does) whips the little car out into the melee. Cars are coming at us. Cars are swerving around us going both directions from both sides. Cars are nearly brushing up against us…I swear one of the cab drivers had a sty in his eye and we were so close I could see the damn thing.

Now, we have to go out onto a main road. Holy CRAP. Now we have a two-lane road with four rows of traffic. No kidding. I am seeing motorcycles with three and four people on each one. Entire families ride on one little Kawasaki. But by God, they are smiling. The “cool” thing about Pakistan drivers is they never flip you off and they always smile just before they push the front fender of your car out of their way. Truly a friendly group of lunatic drivers.

My final observation for the day is the level of poverty I saw while in Pakistan. When you drive through the small towns, the buildings are barely standing, there have been little improvements on them since their initial placement, and some of them honestly look like they might fall down at any moment.

There are hundreds of people who literally live on the side of the road. Some are fortunate enough to have tarps that they stretch between trees or sticks they dig into the ground, but many simply have a cot that they set on the side of a road and tie their goat or donkey to. There are neighborhoods where the housing is so scarce that I wondered if they were actually populated, but when you get in, you notice that they are actually overpopulated.

Everywhere you look there are armed soldiers and police. They simply watch. The police blockades are frequent and in some places they write down every license plate that passes through their sector. It sounds very scary, but in all actuality, there was nothing scary about it. Once you realize how normal that is, it becomes sad.

Here is a culture that is one of the most creative and outgoing I’ve ever seen and they are relegated to poverty because their government refuses to organize and acknowledge their existence. How can that possibly be? I think they simply don’t care. They have their fancy houses and their bank accounts and they have the power to allow hundreds of people to die with nothing. And yet, the people living on the streets smile and nod as you pass. They greet each other with firm handshakes and warm hugs. It is incredible.

But now it is time for our weekly call to the family, so I will sign off so I can get the actual recipe for my sister-in-laws Chicken Corn Soup. It was heavenly.

3 responses to “The Streets of Insanity”