All Depends on How You Look At It (Marc Vun Kannon) 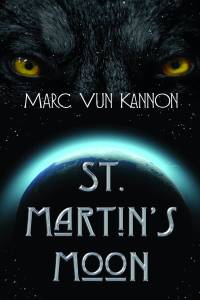 This is my last blog tour stop before my latest novel, St. Martin’s Moon, becomes officially available, and I will be in South Carolina at their Book Festival in Columbia (May 14 – 15, 2011) on that happy day (Sunday, if you must know). And I hope you must, since I’d really like for you guys to be there to help me celebrate the official release of the world’s first Gothic SF novel. I invented the category, so I oughtta know. There are other SF novels written in the Gothic style, but they go the usual route of assimilating all the Gothic stuff into the SF trope of the day (it’s amazing what you can blame on biotech and some nanobots in a low-gravity environment). St. Martin’s Moon isn’t one of them.

I’ve spent literally years trying to figure out how to describe this book. I could do one-liners, what they call taglines. I could do two-liners, the sort of short description you’d find in a TV guide, what they call a logline, but don’t ask me why ‘cause I don’t know. I even came up with a good back-cover description. But anytime I get closer to the plot than that I get tangled in all the strings.

The reason for the confusion, I decided, was in the genre I was using to categorize the damn thing. Why would a mere genre category do that, you ask? How could it? Well, genres are a sort of shorthand, a kind of box we put stories into so that someone looking for a story of a particular type can find one easily. The problem comes when a story doesn’t really fit into any particular type. Then the shorthand becomes something of a straitjacket. One would think a novel with werewolves and ghosts in it would fit neatly into the heading of a paranormal. Since it took place on a lunar colony it clearly was futuristic, right?

While the story does have werewolves in it the story really isn’t about them, it’s about the people who become them. How do they live with the curse? Where does the curse even come from? Why does the Moon matter, and a full Moon, at that? These are all questions that the main character, Joseph Marquand, Earth’s greatest werewolf hunter, would like to know the answers to, because he hates his job. Killing the wolf means killing the man, usually an innocent man. When his latest case involves a werewolf attack on the Moon itself, it drives these questions from his mind in favor of something more immediate, but not far, not far at all.

In short, the story is more futuristic than paranormal, and more SF than merely futuristic. SF looks for answers, takes for granted that there are answers, which gives it something in common with the mystery novel St. Martin’s Moon was originally conceived as. Except that SF doesn’t allow for ghosts. It could handle werewolves, I think, since they have a trigger and are stoppable. Ghosts somehow don’t seem to fit into the same bucket. There’s a reason for this, I think, and I don’t think science will ultimately be able to account for ghosts any more than they’ll make a truly AI computer. So SF is fair game, in my opinion, to have a few genuine ghosts appear in its otherwise unhaunted halls. If I could have worked in a dark and stormy night I would have, but hey, it’s a lunar colony we’re talking about here. A haunted one.

Like many writers, I started when a story came along and decided that I should write it. Don’t ask me why. Others followed, until now I’m afraid to go out of the house with a recorder or notebook in my hand. But I show them, I refuse to write the same story twice!

You can also check out his really cool Blog

Other things to read by Marc Vun Kannon: