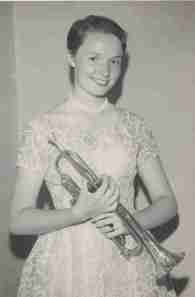 Music and mayhem . . . the story of my life. Sound incredible? It’s true. I began playing trumpet when I was eight, joined the musicians’ union at fifteen and later studied with two Boston Symphony trumpeters. For more than three decades I played an eclectic mix of gigs ranging from the Ringling Brothers Circus to opera, symphonies and solo trumpet recitals. 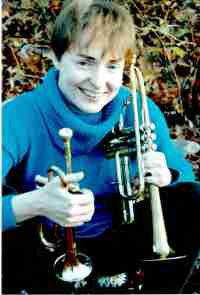 There were heart-stopping moments. Would the trapeze artist make that quadruple summersault or would he fall? And nothing beats the drama of an operatic diva in all her glory, interrupting a dress rehearsal of La Traviata to demand a cup of hot tea.

The mayhem began in the mid-1980s. I took a course at Emerson College, fell in love with fiction writing and discovered my dark side. My print-journalist father might be responsible for my fascination with crime. When I was a teenager he would take me to fires and tell me stories about the murder cases he covered. He even taught me how to play pool at the police station. How cool is that?

Between 1990 and 2000, while I was gigging and teaching part time at Brown University, Wheaton College, and Berklee College of Music, I managed to write three novels. And threw them away. They weren’t ready for prime time. In 2001, determined to be published, I moved to New Orleans to focus on writing. The Big Easy became the setting for my first suspense thriller. Inspired by an actual serial killer that terrorized women in the Baton Rouge area, ABSOLUTION was named Best Mystery-Suspense-Thriller of 2009 by the Premier Book Awards.

So how did a nice trumpet player like me become a vicious killer? And why do I do such nasty things to women? Some dismiss crime fiction as cheap entertainment. I disagree. Crime fiction reflects real life, with its moral dilemmas and hard choices. Many women read crime fiction to manage their fear of real-life violence. It’s only a book, only a movie. In real life, violent criminals often go unpunished. Not in my novels.

On my website you can hear samples of my trumpet CD and read a sample of ABSOLUTION: www.susanfleet.com My love of music and passion for touting talented female musicians is as strong as ever. Based on a course I created at Berklee, I gave jazzwomen lectures at the New Orleans Jazz Visitor Center and the Public Library, Dillard University and the Louis Armstrong Festival. I now spotlight talented women on my website. March is Women’s History Month, so I hope you’ll read about them in my Archives: http://www.archives.susanfleet.com

Although I moved back to Boston in 2010, the mayhem continues. My next novel is due out in June, 2011. Set in post-Katrina New Orleans, DIVA features my series protagonist NOPD detective Frank Renzi. A diabolical ex-military man is stalking a beautiful young flute soloist. He’ll do anything to have her … even commit murder. Stay tuned!

You can find Susan at: