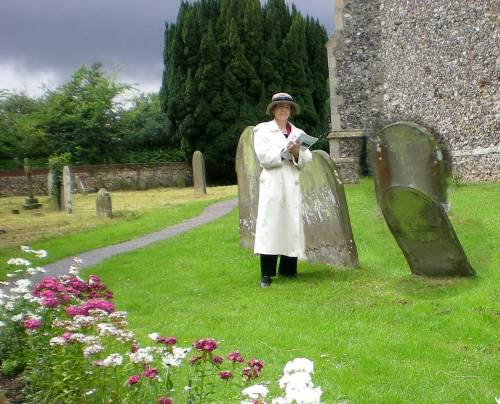 I was recently interviewed on a talk show where the hostess said what a change of pace it made to have a writer of ecclesiastical thrillers on the show because they had had a string of authors who wrote about vampires.

I laughed and said that I thought that to many readers the monks in my books would probably seem just as esoteric as vampires do to many people. My interviewer admitted that, to be honest, she was among that number.

All of which got me to wondering if my Monastery Murders could be classed as paranormal. But actually, it was Felicity, my heroine, who had the thought first.

Early on in A VERY PRIVATE GRAVE, Felicity, a very modern young American woman who found she hated teaching Latin and didn’t know what else to do with her classics degree, went off to study theology in a monastery “in a fit of madness” as she says, muses:

What was the right term to describe how she was living? Counter-cultural existence? Alternate lifestyle? She pondered for a moment, then smiled. Parallel universe. That was it. She was definitely living in a parallel universe. The rest of the world was out there, going about its everyday life, with no idea that this world existed alongside of it.

It was a wonderful, cozy, secretive feeling as she thought of bankers and shopkeepers rushing home after a busy day, mothers preparing dinner for hungry school children, farmers milking their cows— all over this little green island the workaday world hummed along to the pace of modern life. And here she was on a verdant hillside in Yorkshire living a life hardly anyone knew even existed. Harry Potter. It was a very Harry Potter experience.

Therein, I think, lies much of my reason for choosing to write in this rather esoteric subgenre: This is a world — parallel universe— I have become acquainted with through my own research of English history, my own spiritual journey, and my daughter’s decision to— yes— study theology in a remote monastery in Yorkshire after finding she really, really hated teaching school in London. (Well, literature follows life.) And I found myself wanting to share this world and some of the amazing adventures I had tromping over ancient holy sites.

For me, if I am going to give my reader a “you are there” experience it’s much easier if I have had the experience myself— except for the murders, you understand. So I try never to put Felicity and Antony in a place I haven’t been myself, then I can only hope my reader will follow me there: St. Ninian’s cave on the edge of the Scottish coast, the windsweapt bluff of the ruined Whitby Abbey, the Holy Isle of lindisfarne in a raging storm. . .

Perhaps the greatest challenge for a writer is to lead their readers into dreaming the fictive dream. And once we’ve lulled them into that state, not doing anything graceless to jerk them out. This is especially true when one chooses to write about an unfamiliar world that many readers might consider paranormal, so I try to make that alternate universe feel real by using references to everyday things such as the weather— always lots of that in England— and food— not always easy to come by when you’re chasing and being chased by murderers.

Another interesting aspect in developing Felicity’s Alice-Through-the-Looking-Glass experience (as she describes it in another place) is showing her delights, confusions and frustrations of being an American in England. Yes, the plumbing almost defeats her. 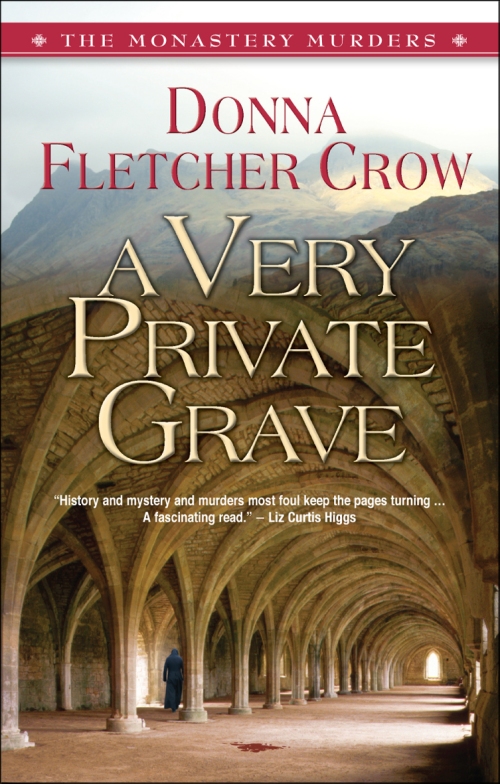 One of the major functions of fiction is to expand the reader’s universe (the English lit teacher speaking again) so if you, gentle reader, find monks as arcane as vampires, I invite you to take a glimpse at Felicity’s parallel universe. And, yes, she does visit Dracula’s home.

To see the trailer for A VERY PRIVATE GRAVE , view pictures from my research trips or buy the book, to go: http://www.donnafletchercrow.com/

Donna Fletcher Crow is the author of 35 books, mostly novels dealing with British history. The award-winning GLASTONBURY, an Arthurian grail search epic covering 15 centuries of English history, is her best-known work. A VERY PRIVATE GRAVE , book 1 in the Monastery Murders series is her reentry into publishing after a 10 year hiatus. Book 2 A DARKLY HIDDEN TRUTH will be out in 2011. THE SHADOW OF REALITY, Book 1 The Elizabeth & Richard Mysteries, is a romantic intrigue available on Ebook. A MIDSUMMER EVE’S NIGHTMARE, Book 2 in the Elizabeth & Richard series will be out spring 2011.

Donna and her husband have 4 adult children and 10 grandchildren. She is an enthusiastic gardener.

4 responses to “Vampires, Monks, English Lit Teachers and other Paranormals”