The Gift of Mystery 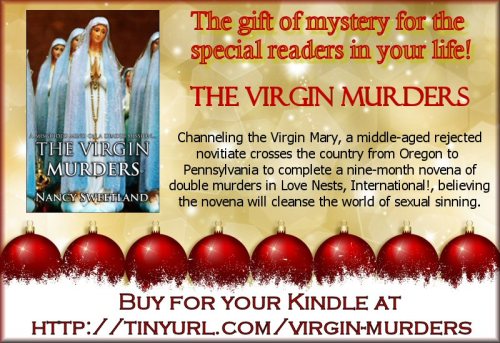 Posted on December 5, 2012 in Blatherings, eBooks, Just for Fun

Give the Gift of Mystery & Mayhem

I got hooked on mysteries at a tender age. Their logic and careful structure first began fascinating me when,  sworn to secrecy by my grandmother who worried my mother wouldn’t approve of such a young girl reading mysteries other than Nancy Drew,  I sat in Nana’s wicker rocking chair reading books by Agatha Christie.

I became quite good at figuring out who did it before Dame Agatha had Miss Marple or Hercule Poirot tell me, and I offered myself liberal congratulations for my cleverness. It wasn’t until I started writing mysteries myself that I realized  the masterful Christie probably knew on which page I could know, not just guess,  the villain’s identity before she even started writing her book.

Solving a mystery is like solving a logic puzzle—Sudoku on steroids— and if that isn’t fun enough, mysteries can give a reader, or me as a writer, an excuse to delve into a world of fascinating but unsettling things like decomposition, accidental mummification, and how ligature strangulation and death by hypothermia work. For me, researching those topics is akin to being a four-year-old playing with rubber dinosaurs: the game is enjoyable and I can control what might otherwise give me nightmares.

Mysteries, at least the kind I like and write, let me fill the sleuth’s shoes for a time and, from the safety of my favorite reading spot, live in a more daring world than my own and outwit the murderer within about three-hundred pages. 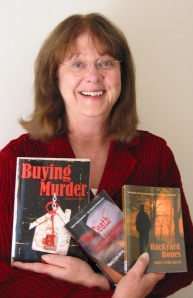 Nancy Lynn Jarvis has been a Santa Cruz, California, Realtor® for more than twenty years. She owns a real estate company with her husband, Craig.

After earning a BA in behavioral science from San Jose State University, she worked in the advertising department of the San Jose Mercury News.  A move to Santa Cruz meant a new job as a librarian and later a stint as the business manager of Shakespeare/Santa Cruz.

Nancy’s work history reflects her philosophy: people should try something radically different every few years. Writing is her newest adventure.

She invites you to take a peek into the real estate world through the stories that form the backdrop of her Regan McHenry mysteries. Details and ideas come from Nancy’s own experiences. 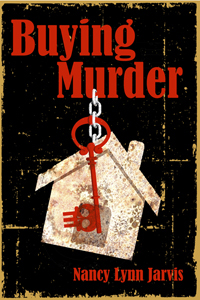 Murder gets personal when human remains are found in the beach cottage that realtors Regan McHenry and her husband, Tom Kiley, buy. The murder victim has been hidden away for sixteen years, and although the authorities quickly discover his identity, the trail to his killer is cold.

Regan has sworn off playing amateur detective, but when it becomes clear the police have to focus on more pressing crimes, she has to break her promise. As her policeman friend, Dave Everett, says, “Your house, Regan, your murder.”

Welcome back to Santa Cruz, the community whose unofficial motto is “Keep Santa Cruz Weird,” for the twists and turns of the third book in the Regan McHenry Mystery Series.